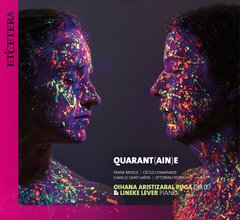 Quarant(ain)e
Cellist Oihana Aristizabal Puga and pianist Lineke Lever will both turn 40 in the same week of the spring of 2021; their dual anniversaries were the inspiration for this CD. They delved deeply into the lives of several composers, exploring not only how the world might have looked in their time, but also whether they were married and had children, as well as the music they composed at that time. One composer might have been happily married, another greatly concerned about alarming events such as WW1, while yet another might have suffered from depression. How does their research relate to life and the world we live in at this moment in time? This program dwells upon the juxtaposition of being fourty then and now.

Oihana Aristizabal Puga and Lineke Lever shed light on this diversity with music from the French Cécile Chaminade, the Britisch Frank Bridge, the French Camille Saint-Saëns and the Italian Ottorino Respighi.

Oihana Aristizabal Puga was born in Irun in the Basque region of Spain in 1981. Lineke Lever was born in Maastricht in the Netherlands in that same year. Especially for them, The Basque poet Erika Lagoma Pombar and the Maastricht-based poet Wiel Kusters each wrote and recorded a poem for this CD. Through these poems Oihana and Lineke both acknowledge their roots and consider the places where their lives began forty years earlier.

Why Quarantaine? This French word entered the English language as ‘quarantine’ around 1804; the French term and originally meant a period of forty days. Apart from its numerical origins, the word can also be applied to how musicians are isolated at this point in time. This recording was an important incentive for Oihana and Lineke to continue with their work, particularly in a year of several lockdowns. They were able to keep their music alive and resonant by embarking on such a large project; the works they perform here are filled with contrasts, silence, poetry, and beauty.

The musicians “One gem follows another in exemplary performances by two musicians who — quite rightly — not only believe in this music with their heart and soul but constantly express it with radiant conviction.” Aart van der Wal in a review of the CD La Lecture. 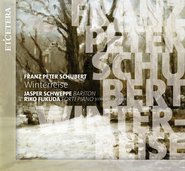