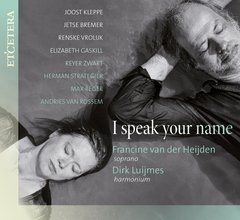 I Speak your Name

I speak your name… You can be carried by a sentence, you can feel a word. I speak your name… if someone is absent, whether a meter and a half away or even gone behind the horizon, we need only utter their name to bring back memories, hope and love. The language of music also has this power to move. And, therefore, what better title for this CD? I speak your name is a poem by Sophie Jewett, which was set to music for us by Renske Vrolijk. Renske was not the only one who wrote for us: many of her colleagues have blessed us with beautiful compositions for voice and harmonium in recent years, including Jetse Bremer, Joost Kleppe, Elizabeth Gaskill and Reyer Zwart. Our appreciation for their work grows with every concert we give. With this recording we can perform their songs over and over again, hold them close and cherish them. The sound poems of Herman Strategier and Max Reger, the only foreign guest on this CD, hark back to a more distant past. The Rilke Songs by Andries van Rossem sparked our desire to make this CD. The performance in the Orgelpark in Amsterdam in 2012 felt like the collective breath taken in by three wind instruments. In retrospect we see the vulnerability of that performance as the best homage we can render to these notes. Wind from the moon… A groping falling leaf… Soprano Francine van der Heijden is a performer of Lieder, oratorio and opera. Among her many CD recordings the world premiere of Mendelssohn’s concert aria “Infelice! Ah ritorno età dell’oro” (forgotten for more than a hundred years) stands out (Claves). She collaborated with conductor Ed Spanjaard and sopranos Christiane Oelze and Miranda van Kralingen in a complete recording of the concert arias of W.A. Mozart (Brilliant Classics). Francine van der Heijden has had the privilege of working with specialists in historical performance such as forte-pianists Ursula Dütschler (The art of Mendelssohnian song, Claves Records) and Bart van Oort (Schubert Fern und Nah, Quintone) , Jaap van Zweden and conductors Frans Brüggen, Christian Zacharias and, for many years, Ton Koopman. Teaming up with the gifted Dirk Luijmes has led to new repertoire for voice and harmonium. Dirk Luijmes, who took conservatory degrees in organ, harpsichord and church music and a university degree in musicology, is active in various fields in the music world. He has come to the fore as one of very few musicians in the world who perform professionally on the harmonium. More than twenty-five composers have written works for him, including Willem Breuker, Daan Manneke and Guus Janssen. He has played in the Concertgebouw (Amsterdam), the Musikverein (Vienna) and the Teatro Colon (Buenos Aires). In New York’s Carnegie Hall he gave the American premiere of Martijn Padding’s First Harmonium Concerto, written specially for him, accompanied by the ASKO-Schönberg Ensemble under Reinbert de Leeuw. Luijmes is artistic director of Stichting Longen & Tongen, is active as a text writer (for the Amsterdam Concertgebouw) and for many years produced programmes for Dutch radio. He has recorded various CDs, including the 4-CD-album Harmonium Atlas (Quintone). 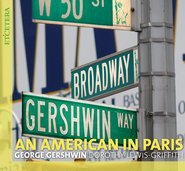 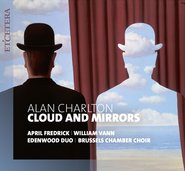