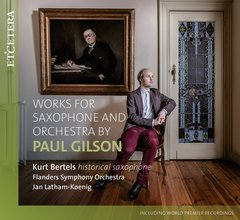 Works for Saxophone and Orchestra by Paul Gilson

A research project into the saxophone class of the Royal Conservatory of Brussels (1867-1904): the world’s first concertos for saxophone and orchestra by Paul Gilson (1865-1942) Saxophonist Kurt Bertels hopes not only to make the Belgian composer Paul Gilson’s works for saxophone and orchestra much better known but also to broaden the instrument’s standard repertoire with his CD Works for Saxophone and Orchestra by Paul Gilson; the recording was made in collaboration with Flanders Symphony Orchestra. Bertels endeavours to present these works in a historically informed manner, with the intention of linking the instrument to the movement for historically informed performance.

This CD is the artistic result of the doctoral research (2014-2020) carried out by saxophonist Kurt Bertels at the Koninklijk Conservatorium Brussel and Free University of Brussels. His research focused on the context, performance practice and repertoire of the saxophone school that existed at the Royal Brussels Conservatory between 1867 and 1904, and it led to the rediscovery of the autographs of Gilson’s Premier Concerto and Récitatif et Sérénade. The Brussels-born Paul Gilson composed two concertos for saxophone and orchestra — the first ever to be composed — in 1902; Gilson also reworked his Récitatif et Sérénade for cello and orchestra into a version for tenor saxophone in 1906. The latter work forms part of the Paul Gilson Foundation in the music library of the Royal Conservatory of Brussels; Gilson’s first saxophone concerto, on the other hand, was only rediscovered after a long search.

Kurt Bertels, saxophone It is thanks to Dr. Kurt Bertels’ thorough artistic research and his performances of works from the classical saxophone repertoire, including works by Belgian composers, that this repertoire is now more topical than ever before. He has performed as soloist in orchestral and chamber works in Belgium, the Netherlands, Luxembourg, France, Germany, Croatia, Italy, Slovenia, Lithuania, Portugal, China, Norway and the USA. He is a member of the Kugoni Trio and the Anemos Saxophone Quartet, whilst his musicological research has won him invitations to relevant national and international conferences. He has also given masterclasses at the Universität der Künste (DE), the Royal Birmingham Conservatory (UK), the Lithuanian Academy of Music (LT) and the School of Music in Auckland (NZ). 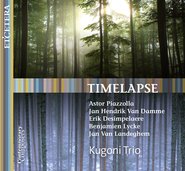