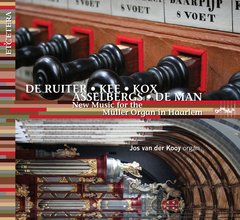 New Music for the Müller Organ

Late in 1997, Jos van der Kooy (Haarlem city organist), Piet Kee (organist and composer), and Wim de Ruiter (composer) drafted a proposal which they submitted to the municipality of Haarlem, requesting money in order to commission five compositions which were to be performed over the years 1999-2005. The works were to be specially composed for the renowned Müller organ, located in the Great, or St. Bavo Church, and they were to be performed by the city organist. Haarlem’s musical reputation—locally, but particularly at the national and international level—is closely linked to its status as the home of the Müller organ, located in the Great or St. Bavo Church. This organ is justifiably famous throughout the world for its unique tonal qualities. Haarlem’s reputation is further reinforced by its ancient institution of a city organist, as well as the weekly free concerts given during the summer, and the International Organ Competition with its associated academy for professional organists. Haarlem, as a result, has become an international center for the organist’s art. New repertoire, not necessarily liturgical in inspiration, is of the greatest imaginable importance in order to sustain the organ’s role in contemporary musical culture. Even today, the organ is all too frequently associated exclusively with music drawn from religious sources of inspiration. However, organ playing in Haarlem is instead intended to present the organ to the audience as a secular instrument, free of any connections other than purely musical ones. For this reason, Haarlem is particularly well qualified to play a role in this expansion of the repertoire. The initiators of the project acknowledge the exemplary response of the municipality in awarding them a multi-year grant. At last we have a project which may actually succeed in establishing a trend because of its longer duration. On this CD, we present you with the results. 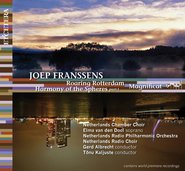