cello Roel Dieltiens rapidly won international renown as a cellist and was soon regarded as an authority on both the modern as the baroque cello. His strong personality, surprising musicality and unconventional approach brought him to the world's greatest concert halls in London, New York, Paris, Berlin, Moscow and Tokyo. He is also known internationnaly as a chamber musician thanks to his work as founder and artistic director of "Ensemble Explorations". 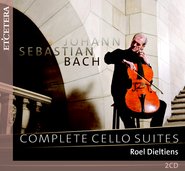