Elisa Medinilla concluded her formal training with distinction under Boyan Vodenitcharov at the Royal Conservatory in Brussels. She has subsequently worked with Luk Vaes and Ian Pace and has also taken part in master classes under Menahem Pressler, Daniel Pollack, Evelyne Brancart and Andreas Staier. She has been a member of the contemporary music ensemble Nadar since 2006. 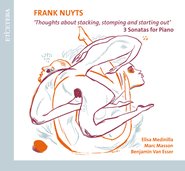