The Cello Octet Conjunto Ibérico is a full time ensemble, a unique for- mation in the world of classical music. Writing about the Conjunto Ibérico, the press has said: ‘...they are the discovery of the nineties, demonstrate the perfection of a string quartet and combine the volu- me of a small chamber-orchestra with Mediterranean passion’. Recently the same press described the concerts with Teresa Berganza in Amsterdam, Brussels and at French festivals as ‘...highlights of the season’. The career of Conjunto Ibérico, founded in 1989 by Elias Arizcuren and supported by Mstislav Rostropovich and Yo-Yo Ma, could be summari- sed as 11 CDs and over 50 first performances of works by today’s most notable composers. Thanks to Elias Arizcuren’s tenacity, the Cello Octet is able to offer original works, most of them dedicated to Conjunto Ibérico, by composers including Xenakis, Nobre, Halffter, Pärt, Boulez, Donatoni, De Pablo, Bussotti, Denisov, Loevendie and Glass. Conjunto Ibérico also plays some 80 beautiful Spanish songs (Turina, De Falla, Nin, Montsalvatge, Granados, Guridi, Albéniz) that have been a pleasant surprise to many an audience for several years. The world-famous cellist Yo-Yo Ma recently said in an interview: ‘This ensemble is a treasure indeed, a fine example to the world of music... Wherever I play: Brazil, Japan, the USA, people talk to me about Conjunto Ibérico... Elias Arizcuren is a true visionary, who has achieved something absolutely unique with his group’. Cello Octet Conjunto Ibérico has shown enormous diversity over the years: concerts with Teresa Berganza, dance productions with Conny Janssen’s dance com- pany, concerts with flamenco singer Carmen Linares and premières of works by reputed composers. In addition to the concerts in many European countries and at prominent festivals, Cello Octet Conjunto Ibérico has also performed in Asia, the United States and Canada. 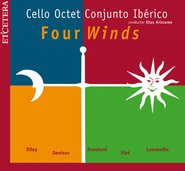 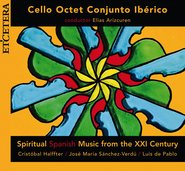