Together with the public and critics, Schola Gregoriana Pragensis and Capilla Flamenca have enjoyed the mixing and juxtaposition of their specific sound pallets for several years. The Schola Gregoriana Pragensis was set up by David Eben in 1987. Thanks to the ensemble’s intensive study of medieval sources, its programmes also include a number of unique, newly discovered compositions dating from the 13th to 15th centuries. The ensemble’s CDs have received a number of awards. 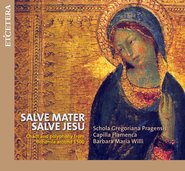