In the 17th and 18th centuries the baryton was called the “king of instruments and the instrument of kings” and “one of the most gracious of instruments”, it had a real popularity in noble circles. This CD offers a unique selection from the one hundred and twenty-six baryton trios written by Haydn. The Instrument The baryton is a very demanding instrument, but the possibilities of sound are rare: there is a gamba, a harp, a harpsichord and of course various combinations. Freek Borstlap plays a baryton built by Eduard van Tongeren (Haarlem, 2003), modelled on a baryton dated 1732 by the Daniel Achatius Stadlmann (Vienna). A second baryton is in the making. The instrument is similar to the viola da gamba, but the back of the neck is hollow and open, where eight or more brass and steel strings can be strung. These are played with the thumb of the left hand and can also be plucked. While a melody is played with the bow on the gut strings, the bass line can be played with the thumb on the strings running behind the neck. The technique of accompanying oneself on what was called the ‘hidden harp’ is extremely difficult. The three musicians who make up the Nederlands Baryton Trio are valued chamber music players who all perform both nationally and internationally with various other ensembles. Freek Borstlap is both artistic director and founder of ‘The spirit of Gamba’. He performs regularly with the French Academia Ensemble and the German chamber orchestra La Fantasia. Helena van Tongeren studied with Jürgen Kussmaul. She is a refined chamber musician, conquering concert halls both in the Netherlands and abroad as viola player of the Van Dingstee Quartet and the Lucebert Trio. Jan Insinger studied with Elias Arizcuren and Dmitri Ferschtman. He is currently solo cellist with the Holland Symfonia. He plays classical cello in the Nepomuk Fortepiano Quintet and the Van Swieten Society. 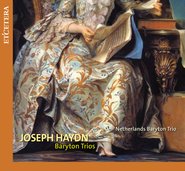