Francien Schatborn (viola) and her regular duo partner pianist Jeannette Koekkoek (piano) were awarded the Zilveren Vriendenkranz of the Royal Concertgebouw in 1994; they have given recitals in Europe and the U.S.A.. Their first duo CD of Romantic Dutch music by Röntgen, Hendrik Andriessen, Geza Frid and Bosmans was extremely well received. Margriet van Reisen (mezzo-soprano) was a prize-winner of the Queen Elisabeth Competition in Brussels in 2000. She has appeared as soloist with the Royal Concertgebouw Orchestra, the National Orchestra of Spain, the Weimar Staatskapelle, the Schönberg Ensemble and the Dutch Bach Society. 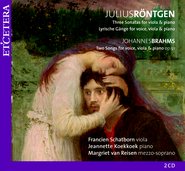 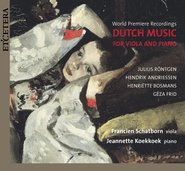