Tina Fux gained her Master’s Diploma in performance with distinction at the Royal Conservatory of Ghent. She then took part in master classes on contemporary works with the British pianist Jonathan Powell. In the summer of 2013 she took part in master classes given by Eliane Rodrigues at the Royal Conservatory of Antwerp as well as taking lessons with the Vietnamese pianist Ton Nu Nguyet Minh at the Hans Eisler Hochschule in Berlin to study works by Kurt Schwaen and Johannes Brahms. She gave a concert in the Kurt Schwaen archive in Berlin in July 2013 where she performed music by the DDR composer Kurt Schwaen. She is currently making a thorough study of the works of Louis de Meester and of other modern Flemish composers, including the cycle oeioeioeioei after the eponymous work by Louis Posman. In collaboration with Marc Michael De Smet and the Aquarius ensemble she will create two music theatre productions: Who killed Louis de Meester? — a provoking production about the forgotten Belgian modernist composer Louis de Meester — and De Lokstem der verten with Lieve Jansen as narrator. Music for this second project will be taken from Charles Koechlin’s Les heures persanes. During her concert cycle “Fux on the Road” she will perform works by contemporary composers Louis de Meester, Morton Feldman, Robert Nasveld, Charles Halka, Karel Goeyvaerts and others. As a pianist she enters the world of contemporary music with an intense curiosity about the unknown. She is also currently studying the history of the visual arts at the University of Ghent in order to create links to other branches of the arts in further musical projects. 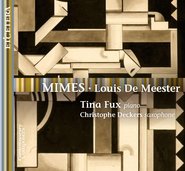