Ever since 1990 the DoelenEnsemble brings listeners classical music of the 20th & 21st century. A broad and striking repertoire is played within continuously changing specifications ranging from chamber music to large scorings with regular presentations of theatre music. DoelenEnsemble concerts are of an internationally recognized high standard challenging audiences with their particular constitution of pieces. Young and up-coming composers are combined with recent masterspieces in which thematic connections give a completely new context to individual pieces. In short, classical music as it is seldom heard and experienced. The DoelenEnsemble was founded on initiative of composer Peter-Jan Wagemans and violinist Frank de Groot in co-operation with the former CEO of the Doelen, Huub van Dael. In its beginnings the ensemble played a series of 20th century chamber music as an addition to the programming of the Rotterdam Philharmonic Orchestra. Under the artistic direction of Neil Wallace the current contemporary programming of the Doelen has resulted in the Red Sofa series, the DoelenEnsemble being at the heart of this important series for new music in Rotterdam. Since 2012 Maarten van Veen is CEO at the DoelenEnsemble, re-inventing the artistic view and goal of the Ensemble. 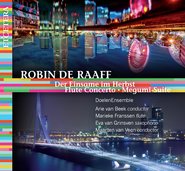