Edith Van Dyck is first flute in the Royal Flemish Philharmonic Orchestra. She and her mother Helene Luyten (piano) have performed as a duo for over 26 years. She began her flute studies with Silveer Van den Broeck at the Stedelijk Conservatorium in Mechelen and continued her studies with Leon Berendse at the Brabants Conservatorium in Tilburg and at the Royal Academy of Music in London with Kate Hill, Sebastian Bell, William Bennett and Patricia Morris. Edith Van Dyck was a prize-winner at the Befius Classics competition in Brussels and won the Fontys Concours for young talent in Tilburg as well as the J&J Brough Flute Prize and the Chris Taylor Flute Award in London. She was a prize-winner in the National Flute Competition Lions Club Belgium and the National Flute Competition in Opwijk. Edith Van Dyck is currently professor of flute at the Conservatory of the Fontys Hogeschool voor de Kunsten in Tilburg. She is also the founder of the Summer Course for Winds. 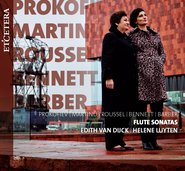