Flutist Eline van Esch let herself be inspired by the paintings of the Dutch painter Jos van den Berg and connected them to the flute music of André Jolivet. Jos van den Berg travelled through Papua and painted with brownish red, grey, black and white, earth and pigment; his works make the colours and substances from nature tactile. The rawness of nature, the people, and their traditions and their art speak to us from his paintings. Jolivet for his part studied the ritual music of non-Western cultures as a part of his desire to express the metaphysical forces that invisibly control our earthly existence. In his works the (a)tonal freedom of the 20th century idiom encounters a timeless primitive music; his compositions are full of connotations, are self-willed and, as he himself says, are made up of ‘organised stillness’. Jolivet’s flute music combines an unpolished primitive intensity with a subdued spirituality. He associates the flute with the breath of life and knows how to compose for it in a phenomenal manner. Eline van Esch and her musicians give a bright and virtuoso interpretation of this extraordinary music. Eline van Esch studied in Amsterdam with Koos Verheul and Harrie Starreveld and later with William Bennett in London. She was appointed solo flute to the Residentie Orkest in The Hague and devotes much time to performing innovatory contemporary music with the ensemble Nieuw Amsterdams Peil. She performs regularly in the Netherlands and abroad both as a soloist and with orchestras (Chamber Orchestra of Europe, the Netherlands Wind Ensemble, the Schönberg and the ASKO ensembles). She worked with Harnoncourt, Berglund, Marriner, Svetlanov and Järvi (sr.). Jos van den Berg describes himself as self-taught despite having followed courses at various academies and studios. His inspiration is mostly drawn from his many journeys to South East Asia. Indonesia is his preferred destination, for its immense collection of ethnographical tribal art that was mostly assembled from local sources. He incorporates his impressions in paintings with many layers, attempting to set down the rawness and inaccessibility of the region from his memories. 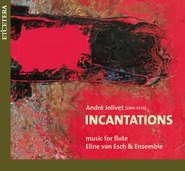