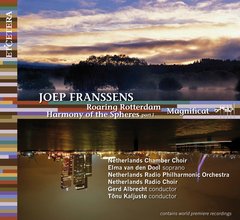 Works for Orchestra and Choir

This CD contains three works that were composed in the late 1990s. Roaring Rotterdam opens with reminiscences of Bach (the opening chorus of the St. John Passion), Smetana’s The Moldau and the opening of Wagner’s Das Rheingold, the pop group Yes and American minimal music. The idiom of Roaring Rotterdam seems at fi rst glance clearly to belong to postmodernism, though in one way or another, the deeply serious tone of this piece is at odds with the ‘anything goes’ attitude. What is more, it seems anything but fragmentary, given that all the discrete elements of the piece combine towards the end of the piece and culminate in an ineluctable granite-like chorale, a triumph of harmonic and rhythmic simplicity and unambiguousness. The choral cycle Harmony of the Spheres attracted international attention immediately after its premiere in the Doelen on 14 November 2002. We can hear the influence of György Ligeti in the first section; Franssens acknowledges this gladly, as he regards the Hungarian maestro as one of the most important post-war composers. Franssens’ Magnificat is certainly a song of praise, but one to texts by the Portuguese poet Fernando Pessoa that deal with nature, with the overmastering strength of sunlight, with the timeless and self-evident existence of the trees and the insignifi cance of the individual before such natural phenomena. Joep Franssens is one of the most well-known Dutch composers at this time. Although his multifaceted musical style does not make it easy to classify him, he is nevertheless often regarded as the Dutch exponent of the socalled New Spirituality movement. His orchestral music is frequently performed in the Netherlands, whilst his choral music has also won international renown. Franssens considers that his task is to reconcile the non-functioning styles of modern music once more with tradition; it is in part thanks to his actions that contemporary music is now again winning a larger audience. Franssens’ music is characterised by broad and dramatic gestures, a defi nite slow tempo that is alternated with an ongoing motion that is also maniacal at times, a feeling for space, monumental arrangements of sound, a tendency towards emphatic repetition and a complete lack of affectation and conscious cerebration. 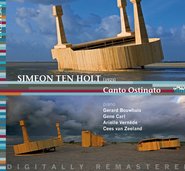 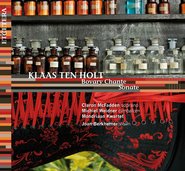