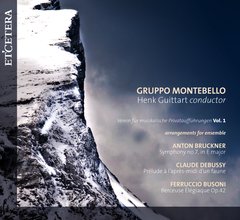 Anton Bruckner [1824-1896] Symphony no.7, in E major (1881-1883) At the age of sixty Anton Bruckner’s reputation was finally established after the triumphal first performances by Arthur Nikisch in 1884 and in particular by Hermann Levi in 1885 of his Seventh Symphony, with its famous Adagio, dedicated to Wagner, the ‘blessed, beloved immortal Master’ who had passed away when Bruckner was composing this movement. At the time of this arrangement by the Society, 1921, the symphony had been performed nine times by the Vienna Philharmonic, in the course of 38 years. According to the prospectus of the Society most of the Viennese performances had been using cuts. It was the aim of the Society not only to present a well-rehearsed interpretation but also to restore the removed passages. The immense task of arranging this symphony was divided between Schoenberg’s composition students Hanns Eisler (Movements I & III), Erwin Stein (II) and Karl Rankl (IV). The omission of the flute in this arrangement is remarkable as well as questionable, in every other arrangement of this size the Society arrangers always included a flute. After having performed the original arrangement several times I decided to add a flute part, revise the other wind parts and change many of the divisions between the piano and harmonium. As much as I enjoy the sounds of the harmonium in the Society arrangements (and most certainly the beautiful Trayser instrument from 1875 which we used for this recording) I was in the end not convinced by the flute solo’s as performed on the harmonium. I used the Nowak edition of the Seventh Symphony as reference score for my revisions. Several ensembles have claimed to be the first to revive this arrangement. However in fact the first group to perform a movement was the Schoenberg Ensemble who premiered the Adagio in 1983, after having presented and recorded many of the first performances of Society arrangements which I had found in the Archive of the Arnold Schoenberg Institute in Los Angeles. Claude Debussy [1862-1918] Prélude à l’après-midi d’un faune (1894) In 1876 the French poet Stéphane Mallarmé published the final version of his Eclogue L’ Après-midi d’un faune. This poem inspired Claude Debussy in the year 1892 to start the composition of his orchestral Prélude à l’après-midi d’un faune, which he finished in 1894 after having published his string quartet and while working on his opera Pélleas et Mélisande. After the success of its first performance several arrangements were published: for two piano’s by Debussy himself (1894), for one piano (four hands) by Maurice Ravel (1910) and for flute and piano by Gustave Samazeuilh (1925). The Society arrangement from 1921 by Schoenberg’s student Benno Sachs seems a logical step, considering the fact that Debussy’s works were presented in a prominent way in the Society by Schoen-berg. William W. Austin wrote a very interesting book on this ground-breaking piece of music (Prelude to “The Afternoon of a Faun”, A Norton Critical Score, Chappell 1970) which has been very influential in my choice of tempi. The book includes Debussy’s own conducting score with his metronome markings, which he also used when he conducted the work in Vienna in December of 1910. Ferruccio Busoni [1866-1924] Berceuse élégiaque op.42. (1909) After the death of his mother in 1909 composer/pianist Ferruccio Busoni composed an extension of his Elegie no.7 titled Berceuse when writing down this cradle song for chamber orchestra. It would be premiered by Gustav Mahler conducting the New York Philharmonic in 1911. The Society arrangement was made by Erwin Stein, who was responsible for the hiring and in most cases for the conducting of the Society’s ensemble. Busoni himself has freely transcribed and arranged works by many composers, ranging from Bach to Schoenberg. He was convinced that even the first writing down by a composer already was the first transcription of what was conceived in the creative mind. After the publication of the Society arrangement of the Berceuse élégiaque in 1973 the piece was very likely performed more often in that form than in its original orchestration. I am convinced that these performances and recordings of the Society arrangement contributed to a renewed interest in this composition and in its composer. This again would be in the spirit of the Society’s goals and ideals. © Henk Guittart 2014 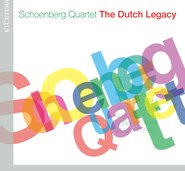