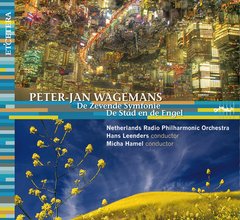 The Seventh Symphony - The City and the Angel

Wagemans is primarily concerned with the development of his material, which does not always have to be by himself. A lesser part of this is the use of contrasts between different types of music, clashes of style and the idea that sound also has emotional and archetypal components. The Seventh Symphony is not only a milestone within Wagemans’ own compositions but is also a monument in post-war symphonic music as a whole; it is a completely original Dutch to two other Sevenths from the 20th century, notably Hartmann’s and Henze’s. All three of them employ the large-scale gesture and take unabashed delight in expression and grandeur in the best sense of the word, all of this being expressed in the most varied orchestral colours imaginable. Despite the huge orchestral forces em- ployed, the work often has a chamber music-like intimacy; there are many passages in the symphony for solo instruments. This is one explanation for the enormous diversity in timbre, density and transparency of sounds in the symphony. The City and the Angel is inspired by the painting ‘The Entry of Christ into Brussels’ by James Ensor. His intention was to suggest a mediaeval feast-day. The various points of departure of this short piece for orchestra are brought together through a skilled application of collage technique called mosaic form because of the rapid changes between the various styles of music. Hans Leenders was appointed assistant conductor to the Rotterdam Philharmonic Orchestra in Au- gust 1999 and he has conducted almost every Dutch orchestra since that time, also replacing Valery Gergiev twice in September 2001. He is now a frequent guest with orchestras abroad. Micha Hamel is both conductor and composer. His music is performed by the most important Dutch orchestras and ensembles; he began his career as conductor with contemporary music and has been a welcome guest with the various Dutch Radio orchestras since 1998. The Radio Philharmonic Orchestra (RFO) has occupied a prominent place in Dutch musical life throughout its long history and has been led by its principal conductor Jaap van Zweden since September 2005. 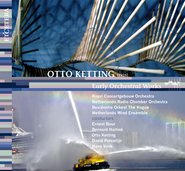 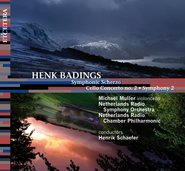 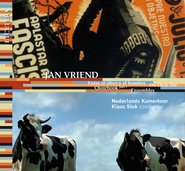