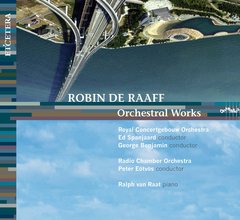 Ask a composer about his source of inspiration and chances are that he will name a number of colleagues. This is partially the case with Robin de Raaff. He will reveal his love for Alban Berg’s music, the most lyrical composer of the Second Viennese School. De Raaff will probably also refer to Igor Stravinsky and Béla Bartók, both composers with similar qualities concerning sovereignty and technique. But perhaps De Raaff’s greatest affinity is beyond music and with architects like Frank Lloyd Wright and Frank Gehry, whose strict geometrically set formulas become flowing forms. Like an architect De Raaff prepares his material in advance: pitches are categorised according to certain proportions in ‘gamuts’ (scales); the same proportions stipulate the rhythmical course and the mutual scale of the parts. Once the lot has been classified and the construction material arranged, then the time is ripe for arising vaulted constructions. In almost all his works, De Raaff exposes a strong inclination to dialogue. Robin de Raaff was born in 1968 in Breda. He first studied composition at the the Amsterdam Conservatory of Music. In 1999 De Raaff was invited ti work as George Benjamin’s only composition student at the Royal College of Music in London. Since 2001 he has been a professor of composition and orchestration at the Rotterdam Conservatory of Music. Marcel Reijans - tenor Danielle de Niese - soprano Mark Tevis - tenor Annett Andriesen - alto Monique Scholte - mezzo-soprano David Wilson-Johnson - bass Paul Rigter - speaking part Vocal Ensemble Nieuw Ensemble Lawrence Renes - conductor 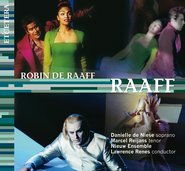 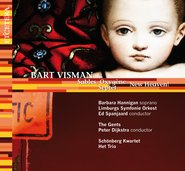